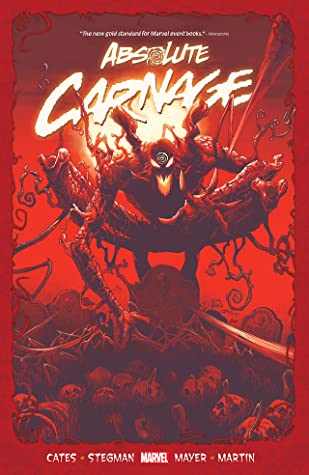 Someone is going around looking exactly like Eddie Brock, with a Venom-like suit, on a killing spree, taking out anyone who has ever called any of the various symbiotes their host. Though troubling for the world, it’s especially troubling for Eddie Brock, now wanted as a serial killer. Knowing well that the real perpetrator is Kleetus Cassidy, aka Carnage, Brock must team up with Spiderman and what few other heroes will believe he’s innocent, and put a stop to Carnage.

Though DC has more been known to utilize dark and gritty elements in their stories than Marvel, few characters get as twisted as Carnage, and his appearance here is no different. Absolute Carnage is a horror story; that much is obvious from its reliance on the literal dark, along with plenty of violent imagery, overwhelming odds, and a plot to summon an otherworldly abomination to Earth: the source of all of the symbiotes in the universe. Carnage’s ability to take over people’s minds and twist them to his goals adds to the overall sense that Absolute Carnage might have at least partially been inspired by the likes of H.P. Lovecraft, creator of the Cthulhu mythos. The story does suffer from relying on previous storylines, which causes it to lose some of its accessibility, but fans of Venom (and especially of his recent film) will enjoy this tale to thrill.

Click here to reserve a copy of this graphic novel!