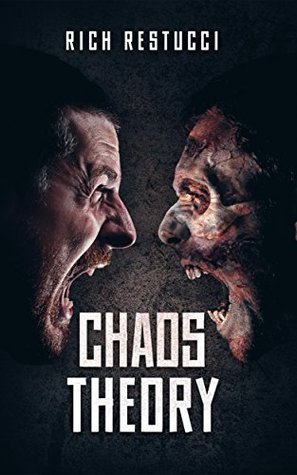 The walking dead are tearing through the world.  An unlikely man with the gift – or curse? – of immunity, and an equally unlikely group of survivors struggle to remain uninfected.  The group – a convict, a Sasquatch-sized mute genius, and a young girl – must pull together to fight off thousands of slow-walking, brain-eating zombies, and hundreds of their much faster and smarter cousins, the “runners,” in order to find some semblance of a normal life.  Unfortunately, the walking and running dead aren’t the only dangers in this world.

If you're looking for a great zombie book, Chaos Theory, book one of The Zombie Theories, delivers!  Biographical information about the author Rich Restucci will tell you almost everything you need to know before you read the book’s summary.  Practicing chemist and lover of beer, guns, and prepping, Restucci injects his hobbies straight into the development of his characters and plot.

Restucci tells the story through the main character’s diary, and this guy isn’t the worn-out main character of other zombie tales – the kind who faces the undead forces with prior military or survival experience, tactically firing automatic rifles and moving through the destroyed setting, carrying out feats of unreal strength and athleticism without ever being scared or worried.  He does, however, have a comedian’s knack for wit and self-deprecating humor, which turn out to be traits just as effective in some cases!

Chaos Theory, and the rest of the Zombie Theories series, is available through audio download on Hoopla.  Between the author’s atypical zombie tale, and award-winning narrator Michael Kramer’s skill in telling the story, lovers of apocalyptic fiction will not be disappointed.

Log into Hoopla to check out a copy of Chaos Theory!