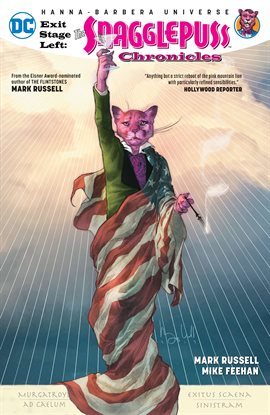 Snagglepuss, a famous Broadway playwright in 1953's America, is called before the House Un-American Activities Committee for potential subversion of the government with his performances. He denies it. Behind his fantastic life, however, Snagglepuss is living a hidden life as a homosexual man, with a sham marriage to a woman who knows his secret, and a boyfriend who he meets regularly at a bar. While he tries to get his latest production off the ground, HUAC refuses to let him go and hunts for some proof of their claims, hoping to turn the playwright into an example and ruin his career.

The Snagglepuss Chronicles is bizarre in all the best ways. It takes itself very seriously, which makes the fact that it portrays Hannah-Barbara classics such as Huckleberry Hound, Quickdraw McGraw, and the eponymous Snagglepuss as closeted gay men during a very turbulent time in American history all the better. No one would expect these characters to be anything more than two-dimensional, like their original selves, but these are men with deep flaws, sincere personalities, and honest relationships... and it somehow works. It provides a wonderful look at the duplicity of people in positions of power, and how that power can corrupt and make you blind to doing what’s right. In many ways, Snagglepuss is very reminiscent of the 2015 film Trumbo, except replace Communism with homosexuality.

With its new and interesting take on some classic characters, The Snagglepuss Chronicles is delightfully strange, and strangely heartfelt.