The Library will be closed Monday, July 4th in observance of Independence Day. Remember, our online resources are always available!

She Who Became the Sun by Shelley Parker-Chan 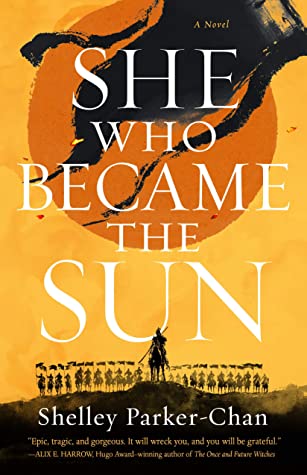 In 14th century China, a girl is born into famine. The local soothsayer says that her brother, Zhu Chongba, will live a life of greatness, while her future is empty. She will be nothing. So when her brother dies in the famine, she takes over his life, hoping to trick Heaven and also take over his greatness. She disguises herself as a boy and becomes a monk, then talks her way into the army, where her cleverness and political savvy have her swiftly climbing the ranks.

At the same time, in the opposing Mongol army, a eunuch named Ouyang plays the role of general, serving under the man that killed his entire family and ruined his life. Though perceived as beautiful and delicate, he is a ruthless and calculating warrior. And each time he meets the mysterious monk in battle, both of their lives are changed.

This is book of incredible political intrigue, with lots of backroom deals and secrets and betrayals. Zhu’s offbeat personality and calculating mind leave you laughing one minute and gasping the next. As someone who didn’t know a lot of Chinese history going into this book, I found it fascinating to learn about that time and place (the book is actually a highly fictionalized story of the emperor Hongwu). It is also interesting to have two gender-nonconforming protagonists—Zhu, who lives her brother’s life for so long that she doesn’t quite identify as a woman, and Ouyang, who is a man but is perceived by others as something in-between. If you like historical fiction with strong characters and intricate, sometimes brutal political machinations (think Game of Thrones but in ancient China), this should be on your to-read list.